So the other day I thought conditions were perfect for a Seattle skyline shoot. I've always wanted to take a shot of Seattle at sunset with Mt. Rainier in the background. I kind of knew there was a park someplace in Queen Anne that was perfect for the shot I had in mind. I did a quick Google Maps search and picked a couple of likely locations. The first one I stopped at wasn't quite it so I went to the second and bingo just the view I was looking for. As I walked over to the spot that looked like it had the best view I notice a bunch of other photographers set up with tripods. Obviously I was in the "right" spot. I think there were at one point 10 people there taking pictures. 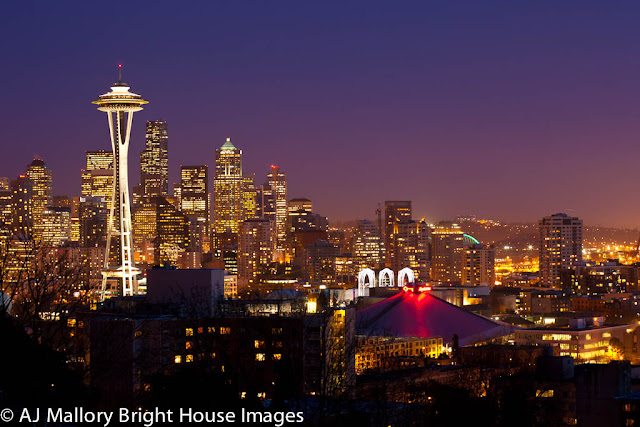 As you can see I didn't get the shot I was after (it clouded over so it's missing Mt. Rainier). Even so I am happy with the results.

So the guy set up next to me had three tripods, two of them with electronic panning heads which allowed him to pan the camera in a very controlled fashion. He was using it to capture a sequence to include in a film. I think it started looking at the sound and then panned to the city as the sun set.

It was a cold night in Queen Anne and photographers were dropping like frozen flies, but the guy next to me was still there when I left. He said he couldn't go into any details of the film he was shooting for, but he did say it was a documentary and give me his card. Here is a link to the film website. Looks like it might have something to do with transportation. Sounded like the film was nearing completion and should be released later this year. I'll be watching for it just because I would like to see what he was shooting.

I will also be watching for that perfect sunset.
Posted by AJ Mallory at 11:00 PM